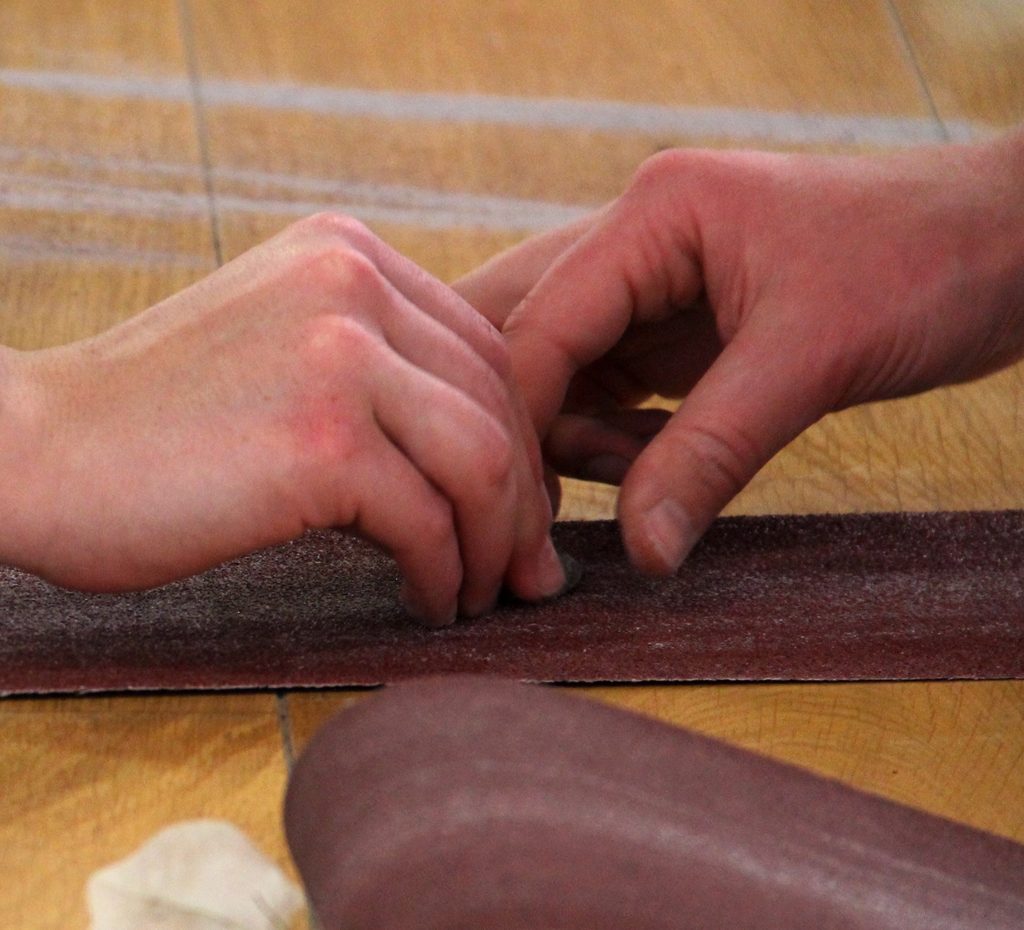 Tone down the edge of an itchy stone
Performance
Duration: 3 hours
Materials: Gravel ground and stones from the buffer zone between Greek and Turkish Cyprus in Kaimakli (an urban area of Nicosia), sandpaper and flowers of the Bougainvillea
Photo by Polymnia Tsinti
Urban Collage residency workshop at Loukia & Michael Zampelas Art Museum in Nicosia (CY)

During my performance-based research on the buffer zone between Greek and Turkish Cyprus, I collected empirical data especially through my sense of touch. I used my body and material to transcend the intimate discomfort of the historically divided area of conflict to create dialogues. The actions resonate the tactility, segregation and emotional space around the buffer zone of Kaimakli.

I sensed the stones itching under my feet and the wind that blew in all directions without any borders turning everything around. For the performance presentation I placed the gravel ground and stones in a circle inside the museum and used them as marking objects. Around the circle I laid white light flowers (Bougainvillea) from the garden and a line of sandpaper.

When the audience entered the museum I stood in the middle of the room on the stones and the audiences walked around me. I laid the line of sandpaper in front of the feet of the audience and started drawing and sanding with a stone in a strait line, to soften the edges. A spectator joined at the other end of the sandpaper and we created together an on-going movement to shape a line. The repetitive rhythm of a scratching stone echoed in the museum, a dialogue without words.

The stones were filed to dust but also became refined gems. The sanding created both friction and soft warmth; this energy was shared with the audience by holding it together in each other’s hands. After the stone was smoothed I placed it back in the circle under my feet. I repeated this action with another stone. Traces of dust lines were spread on the floor as a memory of the conflict, dialogue and the demarcation.

In between I picked up a flower and looked at how it moved by itself in the space. For a moment the dead flower was alive, a presence in the space. The flower blew away like the wind changing the borderline, a view from another side.